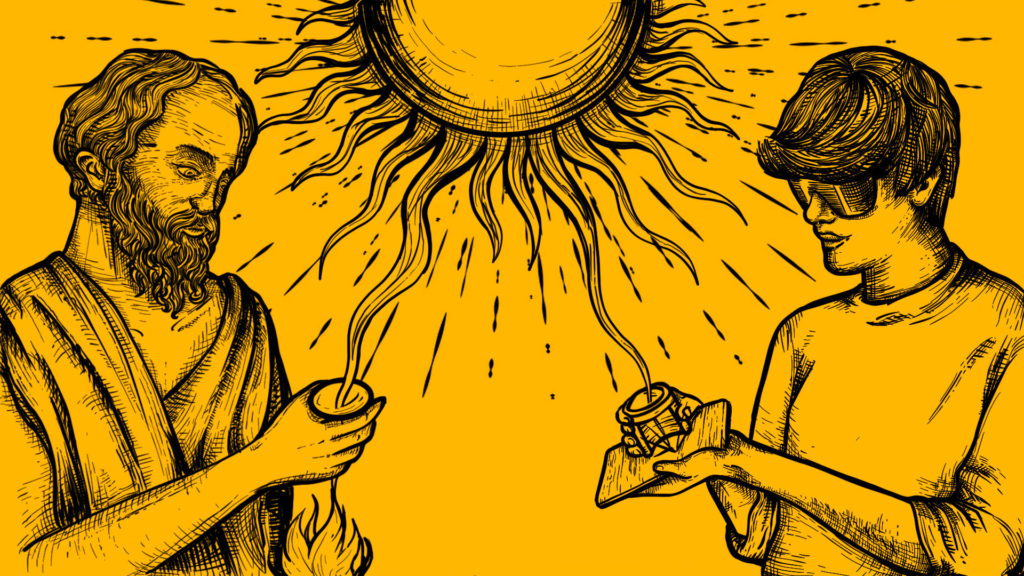 FROM PYROGRAPHY LENSES TO SOLAR ENGRAVING

The history of burning glasses as tools to lit fires and carve things by harnessing the power of the sun goes down the dawn of times. At first, we probably used vases filled with water as rays of sunlight catalyst, directing them to wood or straw. Certainly, this was the beginning of a millenary history, when we controlled sun light in order to burn or carve!

The first evidence in history of burning glasses

The first lens that we know of is the Assyrian Nimrud Lens, a round piece of glass from the 8th century BC found in Iraq. Even though we can’t be sure whether it was used as a burning glass, there are some ancient Egyptian hieroglyphs that depict the use of similar meniscus lenses during that same period. The discovery of these rudimental lenses paved the way for the use of mirrors and glasses for many different applications during the centuries.

Strepsiades:“Have you ever seen this stone in the chemist’s shops, the beautiful one you can see right through, they use to start a fire?“

Socrates: “Do you mean the burning-glass?“

Strepsiades: “I do. What if I took that glass, and when the scribe was writing out the charge, I stood between him and the sun – like this- some distance off, and made his writing melt, just the part about my case?”

Socrates: “By the Graces, that’s a smart idea!”

Aristophanes – “The Clouds”, a dialogue between Socrates and Strepsiades about burning glass – 5th century B.C.

The dialogue above is an excerpt of Aristophanes‘ “The Clouds”, a comedy written in 423 BC in Athens, Greece, for the City Dionysia, a sort of ancient festival in honour of the god Dionysus. The character of Strepsiades, a farmer persecuted by creditors, is considering to use a lens to erase his debt written on clay tablets. This dialogue marks the first written evidence in history of a burning glasses, as a tool commonly used in daily life.

Another Greek who probably used burning lenses is Archimedes, who went down in history for his mathematical and engineering discoveries and inventions. According to the myth, in 212 BC he elaborated an ingenious strategy to defend the city of Syracuse from a naval siege by Romans. He got huge mirrors installed on the walls of the city, which were used to incinerate Roman boats approaching the coast. Unfortunately, Greeks are known for their love for wine and the Roman army entered the city while the guards were celebrating the goddess Artemis.

This tale of Archimedes and burning glasses is told in a 6th century treatise written by Anthemius of Tralles, the geometer and architect who designed Hagia Sophia, the world biggest mosque of the Middle Ages.

Subsequently, Proclus Oneirocrites studied the lenses after being impressed by this tale. He purportedly used that same strategy to destroy the fleet of Vitalian during the 515 AC assault of Constantinople. As a matter of fact, it seems that the real treat Vitalian army had to face was a sulphur-based chemical close to Greek fire, and not the lens proposed by Anthemius, but the research upon lenses continued to improve.

Setting off the sacred fire

Lighting a fire using the solar power is indeed a spectacular event with a magical and mysterious charm, that has really fascinated mankind during the centuries. It’s no surprise that burning glasses were used during religious ceremonies, such as the Christian Easter celebration. For instance, Saint Boniface (672 – 754 AC) explained to Pope Zachary his use of crystal lens to concentre the rays of the sun in order to light up the sacred fire of Holy Saturday.

In more recent times, science took advantage of the lenses’ capacity to concentrate heat in a single point. This led to impressive discoveries during one of the experiments of French scientist Antoine Laurent Lavoisier. In 1774 he used a huge burning glass to discover oxygen, putting an end to the millenary beliefs of the 5 elements that compose the world: air, fire, water, earth, and ether. It was the beginning of modern chemistry, and all thanks to these lenses!

Nowadays, burning glasses still find applications, due to their ability of generating a huge amount of energy, without polluting or producing waste. An example, is the solar furnace. This structure concentrates solar energy, usually with directional mirrors, in a single place in order to reach high temperatures. This concentrated energy – usually in an area smaller than a hob – can reach temperatures from 1.000 degrees Celsius (1.830 degrees Fahrenheit) up to 3.500 degrees Celsius (6.330 degrees Fahrenheit)! One of the biggest is the Odeillo solar furnace, located at Font-Romeu-Odeillo-Via in the Pyrénées-Orientales and it was built during the 1960’s. This solar furnace uses 9.600 mirrors reflecting the sunlight into a 40cm target, in the centre of the main tower. The heat reached is the equivalent of 10.000 suns and is used in aerospace and nuclear safety research. Certainly a better use of these lenses than the bellicose ideas of ancient scientists!

An everyday use, for everyday creativity

Sixty years passed since the Odeillo solar furnace has been built and more than two millennia from Archimede’s burning mirrors, but what is the new frontier of burning glasses?

As we stopped using mirrors as weapons- and this is already good news – we invented a way to use sun to create art! Febo is the first solar engraver capable to convey the sun energy to draw on natural canvas such as wood, leather and cork. Like a solar furnace, it doesn’t need electricity to work and it’s the first pyrography tool that simply works by using a glass and the sunlight! Designed and produced in Italy, this simple yet inventive tool is allowing creatives around to world to express their artistic visions thanks to the the solar power.

At the very end of the long history of burning glasses we can finally create instead of destroy, with the use of this little, but powerful, tool!